Amongst our many other achievements, our advocacy on child abuse issues has been instrumental in raising public awareness. By breaking the silence surrounding the sexual abuse of children and highlighting inadequacies within government structures, WMACA has made great strides and effected positive change in many areas.

Some notable examples include the exposing of one of the most shocking child prostitution cases in Brits in 1998, where a mother and stepfather were accused of forcing their three daughters aged 7, 13 and 15 into prostitution. We organised protests outside the Brits Magistrates Court during the lengthy trial and six men were arrested and charged subsequently.

A hard-hitting protest aimed at the justice system was organised in 2002 outside the Johannesburg Magistrates Court. Protesters held banners emblazoned with the words “Blood on the Hands of Justice”. The purpose was to express outrage at a) the low conviction rate of child abusers, and b) the unacceptable length of time from beginning of trial to sentencing, in child abuse cases. The campaign was extensively covered in the media.

Many media campaigns have been initiated by our organisation. In 2000, together with Dr Karin Muller, Head of Procedural Law at Vista University, we highlighted the unsatisfactory court procedure employed for child abuse cases, and the need to implement specialised courts around the country. Another successful media campaign was undertaken with the Democratic Alliance in 2002, entitled Handcuffed by Government and Red Tape. This concerned the fact that Child Protection Units were severely understaffed and lacking in resources. A fact-finding mission followed, and a number of units received additional resources and manpower as a result.

In 2006 we again joined forces with the DA regarding the disbanding of the Family Violence, Child Protection and Sexual Offences Units of the SAPS. (Previously the Child Protection Units.) We held press conferences and interacted with other advocacy and child abuse groups to voice our dissatisfaction with the non-consultative manner in which the relocation of FCS officers was handled by the governing bodies within the SAPS. This issue is still ongoing and we are determined to ensure that child victims of abuse are not detrimentally affected because of this badly planned move.

The case of six-year-old “Lerato” is a particularly shocking and poignant example of what has become almost a daily occurrence of violence against children in our country.

The little girl was brutally raped in a “veld” near her home in Alexandra in September 2002 by a 22 year-old man, and suffered unspeakable injuries. Besides the trauma of the event, she had to endure major surgery, as her intestines were protruding through a gaping hole in her perineum. The childs’ father, one of the first people to find her, was devastated at the sight of his daughters’ savage injuries.

“Lerato” was airlifted to the Johannesburg General Hospital, where she spent three long months recuperating from major reconstructive surgery. The paramedic who treated her at the scene said he had never seen such a bad case in his 13 years of experience. “When we took her in to Johanesburg Hospital, doctors and nurses began crying,” he said.

Paediatric surgeon Professor Peter Beale who performed the emergency surgery, challenged a daily newspaper to publish an appalling, graphic photograph of the six-year-olds injuries in a bid to shock South Africa into taking action against the scourge of child rape. However, the newspaper decided not to print it.

Professor Beale repaired “Lerato’s” perineum, her vagina and rectum, which had been ruptured behind her cervix, and other injuries to her abdomen. He also performed a temporary colostomy, inserted a catheter, and gave her anti-retroviral treatment.

The surgeon, who had treated at least four similar cases that year, said at the time that if the little girl did not suffer infection, or did not contract HIV, her physical wounds would take six weeks to heal, and the colostomy would be closed. “However, I cannot say much about the emotional and psychological scars,” he added bitterly. 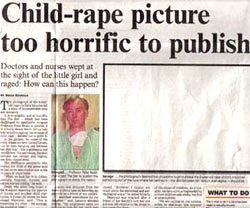 Miranda Jordan Friedmann, Director of Women & Men Against Child Abuse, met “Lerato” and her parents while the little girl was still in the hospital. Miranda provided emotional support for the badly traumatised child and her parents, heralding a deep and enduring friendship.

The then MEC for The Department of Safety and Liaison, Nomvula Mokonyane, arranged for “Lerato’s” family to move to a new, more comfortable home away from Alexandra. Miranda appealed for donations to purchase new furniture and linen for the larger house, and money was raised to assist the family with transportation costs, as well as the cost of the extensive follow-up therapy at the Johannesburg General Hospital. By approaching family and friends, Miranda was successful in finding somebody who was prepared to sponsor “Lerato’s” schooling at a good school near her new home. “Lerato” seemed more relaxed in her new environment.

At her seventh birthday party organised by Miranda in August 2003, “Lerato’s” family, school friends and neighbours enjoyed the very special celebration. The little girl who had endured so much physical and emotional pain, smiled and laughed more than she had done in a long, long time.

Women and Men Against Child Abuse established a Kidz Clinic in Alexandra four months later, in December 2003, and dedicated it to the brave little girl.

Miranda approached Linda Goodman of the Goodman Gallery, to sponsor “Lerato”s” schooling and other needs for 2004. This wonderful woman gave a generous donation, then approached a friend in the US, Isobel Esterick, who became her sole sponsor. This very special lady finances “Lerato’s” school fees, uniforms, books, clothing, therapy and transportation. She will be visiting South Africa and meeting “Lerato” for the first time in September 2005.

The trial of “Lerato’s” attacker, Reuben Modiba, charged with her kidnapping, attempted murder, rape and indecent assault, took place in the Johannesburg High Court in June 2004, almost 20 months after the vicious assault.

Women & Men Against Child Abuse organised a protest outside the court during the trial calling for NOTHING LESS THAN A LIFE SENTENCE FOR LERATO’S RAPIST.

Professor Beale, who had performed the surgery on “Lerato”, told the court that her injuries were the worst he had ever seen as a result of sexual abuse.

Public Prosecutor, Herman Broodryk, told the court he would have called for the death sentence had it been in operation, and urged the court to pass a severe sentence.

A social worker testified that after 22 counselling sessions, the little girl was still unable to speak about her ordeal without breaking down and crying.

Despite DNA evidence linking Modiba to the attack, he claimed amnesia during the trial and showed no remorse.

When handing down sentence, Judge Coetzee told Modiba his crime was “horrific”. “This is the worst case of rape I’ve ever dealt with,” he said, adding that Modiba, earlier described as a “sexual thug,” had kidnapped “this small defenceless girl” for his own gratification, and had then simply abandoned her.

Modiba received a life sentence for the rape, and a 10year sentence for kidnapping. His sentences will run concurrently.

In the two and a years since her traumatic ordeal, “Lerato” has grown enormously in confidence. She is able to communicate well, and expresses her fears and concerns. She will be nine years old in August 2005. Women & Men Against Child Abuse will monitor her progress carefully, particularly as she approaches puberty, a time when she may require additional therapy.