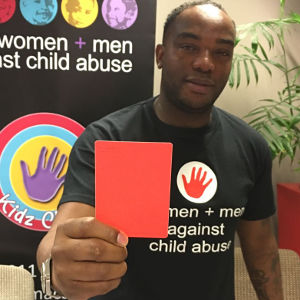 Former Bafana Bafana star striker Benni McCarthy has joined the fight against the scourge of women and child abuse by announcing his support and endorsement for child rights group Women and Men Against Child Abuse (WMACA).

McCarthy, a European Champions League winner and Bafana’s all-time leading scorer, said he was prompted to join this cause to raise awareness and encourage victims of abuse to speak up. He said, as a father of four daughters, he knows that there was nothing more important than to provide safety and security for women and children.

“WMACA have supported many survivors and have been instrumental in improving the rights of children in South Africa and I know the help I will give to expand this work is essential to the future of our nation’s youngsters,” said McCarthy.

McCarthy also spoke about his tough upbringing in Cape Town where he experienced emotional abuse in his poverty-stricken neighbourhood.

“We know that abuse is wrong full stop. This should not even be an issue. Sadly, it is and that’s why we need to fight it. For long this has been going on across the country behind closed doors. This cannot go on any more. That’s why I decided to join this campaign. My upbringing was not easy, I witnessed a lot of things, guns, violence and close friends getting killed.

“We live in a beautiful country and it’s up to us to make a difference. Women and children are harmless and as men need to have little bit more love in our hearts,” he said. “As a child I came from an abusive family and many people don’t know this about me because I am successful and famous. People only see the nice things, the money, the cars and the lifestyle.”

According to published statistics by WMACA, between 85 and 90 percent of children are molested by someone they know. One in three girls and one in six boys are abused before they turn 18. Ninety-five percent of all offenders are male.

“My dad was an alcoholic and he was abusive to my mom and I was a child going through the situation. Physically I was not abused but mentally and for a kid to see these kinds of things you can either go one of two ways. You can either take the path of becoming an abusive person or you can try and make a difference.

“Lucky for me through football I was able to take the right path. Now it’s time for me to give back and not hide behind the fame and fortune. That’s the reason why this campaign is so important for me,” said McCarthy.

Since its inception in 1997, WMACA has helped over 20 000 victims of abuse. It is a non-governmental organisation providing free help to victims of abuse in SA. It also gives direct support to children through Kidz Clinics in Boksburg and Alexandra by fighting for better rights for survivors, proper sentences for abusers and public awareness.

WMACA director Vincentia Dlamini said, “I want to congratulate Benni on speaking out against child abuse and supporting our organisation. As WMACA enters its 20th year, the recognition and awareness needed will bring invaluable support to continue our work to rid SA of child abuse.

“Not that just, but having Benni willing to stand up and speak out on the subject sets and example to society that if we are going to tackle abuse, we are going to have to be willing to acknowledge its huge impact and talk about how we bring it to an end.

“Too many people and too many communities would rather stay silent, and I know that Benni’s example will help change that. In just a one-year period we have assisted over 1 896 new cases of child abuse through our Kidz Clinics.”

November 25 marked the beginning of the international 16 Days of Activism for No Violence Against Women and Children. In addition, WMACA said it will also focus on the abuse of young boys to raise awareness on the issue.