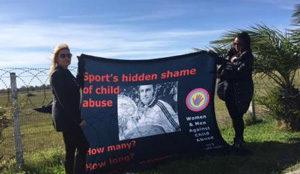 Port Elizabeth – Disgraced tennis pro Bob Hewitt appeared to have dodged the media as he handed himself over to authorities at St Albans Correctional Centre in Port Elizabeth on Tuesday.

Reporters arrived outside the prison at the crack of dawn in hope to get a picture of Hewitt, who will start his six-year jail term for the rape and sexual assault of three teenage girls who were his tennis students in the 1980s and 90s.