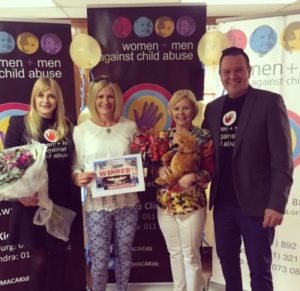 The experience of a lifetime for one lucky woman is set to help hundreds of children who’ve been victims of abuse.

Leading non-profit group Women and Men Against Child Abuse (WMACA) have announced the winner of their competition for a four night all-expenses paid trip for two to the Monaco Grand Prix, heralding the huge impact the money raised will have on their efforts to stop abuse.

The winner is Debbi Talmage from Kyalami, who will be taking the VIP trip to the race in May. The whole prize is worth an estimated R300,000.

Reacting to the news Debbi said “I can’t believe it, I am just so excited. I’ve only ever won 20 rand on the lottery, so this prize is just incredible. I’ve got 3 daughters so know the importance of WMACA’s work and am so proud to support them through this competition.”

Debbi will be taking her husband with her, and says he was more surprised than she was – “I didn’t tell him I had entered, so I am really in his good books now. The prize is truly the trip of a lifetime and an opportunity we never would have had if it weren’t for WMACA.”

After presenting the prize WMACA’s founder Miranda Friedmann said “It’s wonderful to see Debbi’s reaction, she is going to have a fantastic time. If I’m honest I’m a bit jealous! I also want to thank Debbi and all the people who entered the competition. The funds raised will help provide care for hundreds of children and their families and, as we enter our 20th year, it will give WMACA the momentum and resources needed to continue fighting for victims.”

WMACA is a Non-Governmental Organisation providing free help to victims of child abuse in South Africa, giving direct support to children through their Kidz Clinics in Boksburg and Alexandra and fighting for better rights for victims, proper sentences for abusers and public awareness of the terrible impact these crimes have on individuals, communities and society. It was founded by Miranda almost 20 years ago, and has been instrumental in changing laws, attitudes to abuse and the treatment of victims. 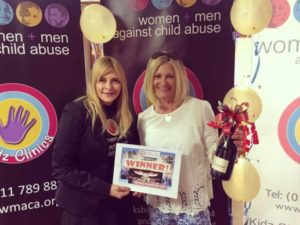 The prize includes business class plane tickets to Nice, VIP Grand Stand tickets for the Monaco Grand Prix warm up round on Saturday 27th May and for raceday on Sunday 28th, accommodation in a 4 Star Hotel for four nights, dinner tickets, a yacht trip and much more.